Changing circumstances demand changes in approach. Clinging to the old ways can be dangerous.

The Praying Mantis in the Schoolyard

When confronted with a threat, a praying mantis has a set program of responses to take advantage of the advantages of excellent camouflage: freeze & blend in, sway like a leaf, run to the nearest tree. All these strategies work well in the normal circumstances of a praying mantis, the leafy greenery of trees.

However when the wind is blowing strongly and a praying mantis finds itself blown to the unfamiliar circumstances of schoolyard asphalt, none of these strategies work. It can’t blend in. Freezing exposes it to risk of being stomped. What it runs towards is not a tree. It is the leg of a small curious boy. In the end, it need a generous young girl to carry it back to the bushes to escape the growing crowd.

A praying mantis can’t change its approach immediately. Evolution will take a while to catch up with asphalt. It will eventually adapt as a species, but that doesn’t help any individual insect.

There is No Formula – Just Learning

Many managers find this discussion deeply unsettling. Advocates of the future of work are calling for change, but they are often either highly conceptual or discussing concepts that seem very alien to the circumstances in an organisation.

The abstraction has a reason. The future of work is being driven by a network economy where the right strategies are often emergent and adaptive. Adopting a new fixed formula is as dangerous as the last one. While we would like a formula (and many offer to sell one), the future strategies need to be learned for each organisation in its own circumstances in the network.  Change can’t be imposed it needs to be led one conversation at a time.

Creating a responsive organisation that can leverage the human potential to learn and experiment a way forward will take new techniques and new ways of organising.  Many of these techniques that are rising to the fore in discussion of the future of work and responsive organisations are ways to foster the emergence of a new better approaches for organisation using networks, rather than fighting them.  That’s why much of the conversation comes back to enabling people to learn and act in new ways: 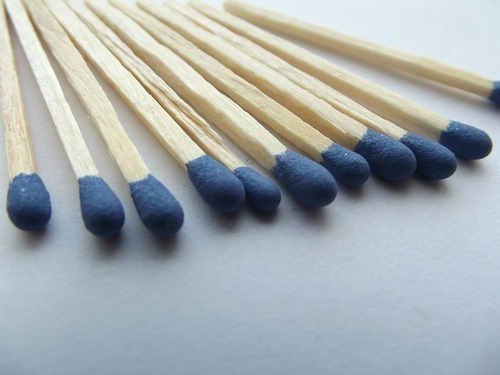 When you become a leader, success is all about growing others – Jack Welch

Leadership is how we realise human potential. To realise potential great leaders help people to step out of their comfort zone. As a leader, you will need to get used to being out of your own comfort zone.

The friction of capabilities against a bigger challenge

A match doesn’t realise its potential until you strike it against a surface. The friction brings out the flame.

Leaders don’t make action safe. Leaders give people the confidence, purpose and support to do unsafe things to learn, to improve or to make change happen. This means guiding people into action, shaping the feedback and reflection to grow learning and helping people back up when they fall short to try again.

Leaders enable people to realise a potential that they might not fully accept or understand. These leaders never confuse competency with capability. They look for the upside. Great leaders help create the achievements that people describe later as “i never thought I could do that but I just did.”

Before people take a risk for you, they want to know you are taking a risk too. If you build in too many failsafes, fallbacks and protections, then you will take the stretch, the risk and the learning away from the team. If you believe in others and take a risk on their capabilities the results & gratitude can be extraordinary.

Leaders can’t play safe to realise the potential of others.

Purpose, leadership and exponential potential.
An extract from The Purpose Economy by Aaron Hurst.

Via Celine Schillinger and Kenneth Mikkelson

The Purpose Economy: How Your Desire for Impact, Personal Growth and Community Is Changing the World | Stanford Social Innovation Review The problem with hierarchy is that it validates the illusion that restructures are valuable management work. Let’s lead people to create potential and better ways of work instead.

Restructures are a Joke

An old joke about management hints at the role of restructures in management life, an opportunity to avoid leadership. In the joke, a CEO is left three numbered envelopes by a predecessor. Each envelope is only to be opened only when the CEO’s job is threatened by a crisis.

Leadership is how we realise human potential in real people. Leadership is not the management of the ideal hierarchical structure of fungible full-time-employee equivalents (FTE). The latter is avoiding the real work of leadership of people.

No human potential has ever been realised in an organisation by a restructure. Restructures may create short term value by reducing the cost of people in an organisation, but without leadership no value is created. Without a change in processes or the patterns of interaction that create culture, the structure change amounts to little. The old culture will take over the new structure. Either cost drifts back because the work processes have not changed or worse the reduced workforce has impacts internally on people and externally on customers.

Sadly leadership often disappears in restructures. Mostly restructures involve an evident loss of human potential. Because many managers view their people as a fungible resource, the costs of human and social capital lost in restructures can be missed. The loss of tacit knowledge and capability is often evident immediately after a restructure as people struggle to make processes work and newly clarified roles fail to cover the inevitable areas of whitespace. The loss of social capital can be seen as new jobs in new structures force people to build new relationships of trust and collaboration internally and externally. Engagement and trust both need to recover.

A focus on structures of fungible people lets managers avoid the hard work of leadership. Poor managers use restructures to force people to “remove resources”. They hope that with less people, the remaining staff will find creative ways to improve, often without any support from leadership. Poor managers also use restructures to address the lack of skills and underperformance of their people that they have been avoiding. In both cases would we not create more performance, more potential and less anxiety if we took on the leadership work to engage people directly?

Leaders need to create organisations, teams and processes where change in work is responsive to the demands of customers and the external market. Large scale shifts in hierarchies are irrelevant when the organisation learns to continuously adapt to the needs of work, supported by leaders focused on creating the right culture and realising more performance through helping people to realise more human potential.

A continuous process of small adaptations in agile teams across the organisation is far safer and far more productive than large restructuring efforts. This process will best leverage the networks in the organisation and employees understanding and engagement. Each of those adaptations brings the organisation closer to better performance for its customers and gives the people a say in how to make their work better and how they can contribute more.