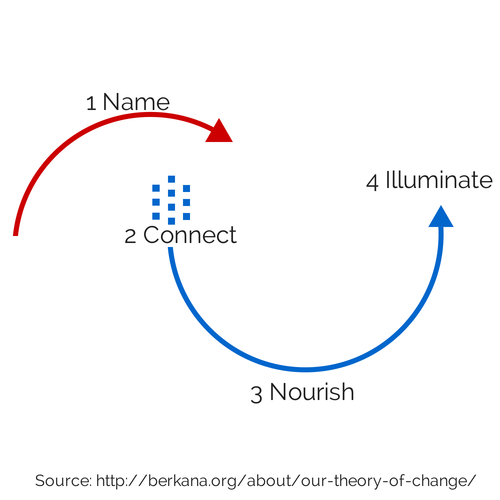 This week at the first meeting of the League of Social Intrapreneurs in Melbourne I was introduced to the Berkana Institute two loops theory of change. The model of change in complex systems resonated immediately.

When a system nears its peak, change agents identify the need for alternatives and drop out.  They connect and begin to explore alternatives nourishing a new system through experimentation. Eventually the stories of their success illuminates the change to those who remain in the old declining system.

A four step model with four simple verbs seems clear and straightforward. Why is it that the path of change is such a cold dark path?

Nobody Warns You about the Dip

Stepping out of a warm and comfortable ongoing system with its present day rewards is a daunting uncertain choice however bleak the future of that system may look. Those with most to gain will oppose the agents of change who name the issues and start to work on alternatives. Opposition will not always be fair or balanced.

Sign you made it as a change agent: someone misapplies a political label, impugns your integrity or questions your sanity. #caww

Most difficult of all is that dip in the diagram above. The uncertainty and the need to build a new complex future means the alternative system starts along way back and with a great deal more risk. Selling another path even to yourself can be a challenge in this scenario.

All the discussions about collaboration, requests for advice and stories shared among change agents at the League of Social Entrepreneurs, in Responsive Organisation, in Change Agents Worldwide or in other conversations that I have with unreasonable people belong at the bottom of the loop where people struggle nourishing new alternatives.

We must embrace the fact that the road to change is a road with dips and uncertainties. Proceeding any other way does not prepare people for the work ahead.

Most change fails after the connect stage.  Declaring a need for change is initially easy and exhilarating. Manifestos are thrilling. Connecting with other like minded people has a wonderful effect for the spirits and is a great way to reinforce the need for change.

Then nothing happens for a really long time. It grows cold and dark on the path of change.

Lots of drudgery dogs those walking the cold dark path of change. Meetings need to be organised and venues found. Compromises need to be negotiated between people who are 99% aligned. Factions and fragmentation occurs and saps the energy of everyone. More change agents need to be recruited, especially for the work. Experiments need to be agreed, funded and run. Failed experiments need to be cleaned up. New experiments agreed, funded and implemented. Success needs to be found. Someone needs to find money or work out the details of the new model. Communication materials don’t write themselves. Just when success seems inevitable the dying system finds a way to set you back.

Change falls apart when the connected agents of change won’t work the experiments long or hard enough to nourish the success of the new system. If they won’t invest the time to build new connections, share successes, to solve the daily issues and to innovate a path forward then the nourish stage will never offer an opportunity to others to join in the change.

If the organisers of the first meet up about a change end up with all the actions, then a change initiative has work to do to find others to nourish the change. Engaging others in the work matters more than engaging them in the idea of the change.

Join in the Work

Lots of people want to join change at the exhilarating beginning and again at the celebratory end. Traditional management focus only on the beginnings and the endings but leadership is found in realising the collective potential of the journey.

The question is who is willing to walk the cold dark road. Those change agents who do the leadership work of nourishing new experiments shape the future. That path is hard but the work is the most purposeful and rewarding.

3 thoughts on “The Cold Dark Path”